Crawl space encapsulation is technology used to treat chronic humidity, mold and unhealthy conditions in crawl spaces. The process completely isolates the crawl space from the ground and outside air by lining the structure with a high-performance vapor barrier, specifically designed for this purpose and installing either a dehumidifier or a crawl space conditioning system.

The objective is to include the crawl space area as a part of the internal envelope of the building. Many homes built on crawl space foundations in the United States suffer from poor moisture management. The current trend of striving for a healthy home is damaged by crawl space moisture. Some of the common symptoms of a crawl space moisture problem are:

These symptoms are most often noticed in the humid spring and summer seasons but can occur at any time of the year. Often, the heating and air conditioning contractor is the first person the residents call to deal with the problem. Typically though, the problem is not due to a failure of the air conditioning system; it results from poor moisture control in the crawl space and can be solved by waterproofing contractors.

The best vapor barriers have excellent physical characteristics, including high puncture resistance, high tensile strength and low water permeability. They will prevent ground moisture from entering the crawl space when installed on the walls and across the soil, greatly reducing the negative effects of a moisture laden crawl space.

If your walls are damp and stained placing a basement wall waterproofing system over the wall will not only make the stone, block or poured walls look better but will act as a vapor barrier shielding the living space from water vapor transmission.

A low permeability vapor barrier in conjunction with a sealed interior drain system protects the basement against moisture. This moisture can cause mold, mildew, fungus, odors and poor indoor air quality. Sealing your basements walls not only makes your basement look better but it protects the health of your family. 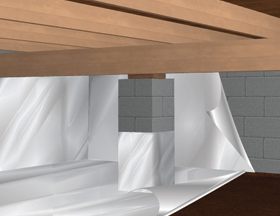 If you are getting ready to finish all or part of your basement a basement wall vapor barrier system will protect your investment from moisture and moisture related problems. There will be no more mold and fungus growing on the drywall, no more effervescence stains on the walls and no longer will you have high humidity levels in your new living space. By maintaining lower humidity levels your new wood work will be shielded from excessive expansion by your new low permeability vapor barrier.

Finishing your basement adds valuable living space to your home and can become the new meeting place for friends and family. But, if your newly finished basement has water leaks or floods, this new beautiful space becomes a nightmare. Protecting your self from this nightmare is as easy as contacting a waterproofing professional.

Thermal vapor barriers are a foil faced vapor barrier that has double layers of bubbles and true white poly wall vapor barrier on the back. The reflective foil face can reflect up to 90% of the indoor heat back into the basement living space. You are now able to save energy and protect against moisture, mold, mildew and potential water leaks all with one product. A professionally installed thermal vapor barrier system is the perfect option if you are going to finish your basement and are concerned about energy usage.

Once again, the thermal vapor barrier, when used in conjunction with an interior drain system will protect your investment while increasing your indoor air quality. If you are tired of ugly and wet basement walls vapor barrier systems can be the answer to new interior living space.

Why is Fixing My Crawl Space Important?

Homeowners may think the crawl space is just a place under a home, but it actually has a very specific purpose. Crawl spaces help circulate air throughout your home, keeping the air inside your home fresh and homey, preventing any unwanted odor from permeating into your everyday lives. That’s why a dirty or damp crawl […]