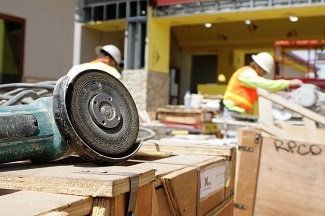 Many homeowners in northeastern Kansas have reported that their house foundations are sinking as a result of the drought the area is experiencing, says Robert L. Parsons, assistant professor of civil and environmental engineering at the University of Kansas .

The eastern third of Kansas tends to have more clay soils than the western part of the state, where soils tend to be more sandy. Under dry conditions, clay soils can shrink, causing foundations and pavements to crack and break, says Parsons, who has researched swelling soil conditions for the Kansas Department of Transportation.

Swelling clay soils are prevalent not only in eastern Kansas but also in western Missouri , eastern Oklahoma , eastern Texas and other states as well.

“In Douglas County we have a great deal of highly plastic clay — the kind that sticks to your shoes,” Parsons says. “It is the kind of soil that will shrink and crack in summer when we have no rain. When it rains, the clay swells and those cracks will go away.

“As the soil moves with changes in moisture, foundations and basement walls move with it. That is what happened this past summer. Many homeowners in this area had foundations go down significantly.”

A lot can be done to minimize damage from shrinking soils, Parsons says.

First, he recommends avoiding building a new home on swelling clay soils. Parsons adds that this may not be possible in parts of eastern Kansas and other states where clay soils are common.

“County soil survey information is available for most counties,” Parsons says. “These surveys can indicate if soil conditions are a major concern, probably a concern or not a concern, for example, although they are not a substitute for an engineering investigation.”

Geotechnical engineering investigations are expensive and, although routine for commercial construction, they rarely are done for residential construction.

“If a structure must be built on a site with poor soils, construction options exist that can minimize or eliminate soil shrinking and swelling for an additional cost,” Parsons says.

In some areas of northeastern Kansas, about the best site a prospective homebuilder can locate is an area with low to moderate swelling conditions, Parsons says.

Second, if you are living in a house experiencing a lot of cracks in the walls or foundation of the house, foundation contractors are available who can stabilize the foundation, add tiebacks to basement walls and replace the soil behind the wall with non-swelling soils and prevent the problem from getting worse.

Trees, even flowerbeds, too close to a house can compound shrinking soil problems during drought, Parsons says.

“Trees can be particularly difficult,” he says. “If you plant trees around your house, make sure the drip line of the mature tree won’t hang over or touch your house.

“What happens is that the tree draws water from the soil beneath and around the tree. If you have a tree on one side of a house, for example, the tree will remove moisture on that side of the house. That side will then tend to go down while the other side does not and then the foundation can crack.

“If you have a flower bed next to a house, especially a depressed flower bed, and you water a lot, then the sides of the house that don’t get that same amount of moisture may shrink during dry periods and you can get the same thing — cracked foundations.”

Prospective homebuyers could look for houses that are at least five or six years old, Parsons says. “Usually in the first five to six years after a house has been constructed, it will have gone through some wet and dry conditions, making it possible to recognize problems from shrinking and swelling soils.”

Parsons offers the following tips for homeowners to help avoid the cracking and buckling in foundations with shrinking soil conditions:

What is That Basement Smell?

A Guide to the Smells Emanating From Your Basement You open the door to your basement and notice an unpleasant smell emanating from down below. You try and place what it is in your head, but come up with zip, zero, nada! So what is that basement smell? Where is it coming from? Why is […]