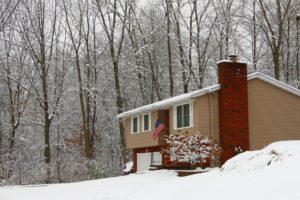 After 18 months of severe drought in Kansas City, we now have experienced two large snow storms and the moisture that goes along with it. Homeowners across the metro area, especially Olathe, Overland Park, and Leawood that recorded the highest snow totals, are facing the next issue of possible flooding and a wet basement. While the possibility of foundation repairs has not disappeared most homeowners are going to be focused on basement flooding problems.

Is there anything you can do to stop your basement from leaking once all of the snow melts? Jeff Tully with My Foundation Repairs in Olathe says homeowners are in for some problems with the spring thaw, mostly because last summer's drought made deep cracks in the soil, allowing the water to get closer to the foundation. Because of the drought that we experienced, the soil beneath the foundation dried out losing cohesion and volume, and less able to support your home. Even when precipitation such as snow increases, the drought zapped the soil of moisture. This caused cracks to form in your foundation. As the thawing of snow happens, the cracks in the foundation take in water.

If your basement has not been waterproofed, the winter months can be a problem. Because the ground is frozen, as the snow melts it accumulates near your home and seeps in through the cracked foundation caused by the severe drought. Then, as the temperature suddenly drops, this water that has seeped into your foundation freezes, causing the cracks to grown even bigger. Calling the professionals at My Foundation Repairs can help you with your foundation repair needs.

Check that your sump pump hose does not have low spots where water can collect. The hose should flow away from your home freely. If it collects and freezes, your sump pump could stop working or even cause permanent damage to it.

He says if your basement does start leaking it is always best to consult a professional.

« Midwest Drought Continues in 2013
Protect Your Home from Melting Snow »