Learn about the terms and products related to waterproofing. 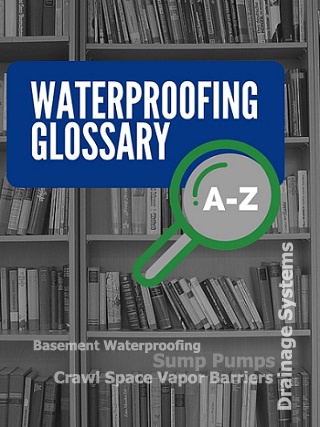 Active soils – A non-load bearing soil mass that is moving due to changing moisture levels.

Backfill – The replacement of excavated aggregate into a hole or against a structure.

Bell Bottom Pier – A concrete friction piling that has a bell-shaped bearing surface.

Bowing Walls – An inward movement of a basement wall due to excessive lateral pressure on the exterior of a structure.

Carbon Fiber Strips – Pieces of carbon fiber material that when bonded to a wall will not stretch. These strips, when installed correctly, will stop cracks from growing but must be installed before the damage has progressed too far.

Cleat Anchor – A deadman that is placed in non-active soils to provide lateral support to basement walls.

Closed Drain – An interior drainage system that keeps water and humidity separate from the living space.

Consolidating Soils – A process by which soils decrease in volume. It occurs when stress is applied to a soil that causes the soil particles to pack together more tightly, therefore reducing its bulk volume. When this occurs in a soil that is saturated with water, water will be squeezed out of the soil.

Crawl Space – A shallow foundation type that incorporates an air space between the soil and the living space. Generally, these foundations are built with concrete block or stone founded on a spread type footing.

Drywall – These cracks develop due to the shrinking or expanding natures of construction materials or foundation failures. The cracks generally develop at corners, doors, and windows in a wedge-shaped manner, pointing toward suspected areas of failure.

Earth Anchor – A device designed to permanently stabilize basement and retaining walls via a cleat or deadman anchor.

Encapsulation – A vapor barrier for crawl spaces that covers the soil and walls to prevent moisture from circulating in living spaces..

Footing – An enlargement at the lower end of a foundation wall, pier, or column to distribute the load of a structure.

Footing Drain – A PVC pipe placed at or below footing levels, encased in gravel, providing a path for excessive water to be routed away from a structure.

Foundation Engineer – A civil, structural, or professional engineer that specializes in the design or remediation of foundations.

Foundation Movement –An apparent post-construction movement of a foundation system that is detectable by changes in elevation accompanied by visible signs of distress, such as drywall cracks, doors out of square in their frames, concrete cracks, etc. These changes are necessary in order to confirm that movement has occurred after the original construction was completed.

Foundation Repair – The art of underpinning or stabilizing a structure that has moved from its originally constructed design.

Foundation Settling – Vertical movement of a foundation wall due to consolidation of soils supporting the structure.

Heaving – A situation where a foundation is raised in affected areas higher than its normal elevation due to expanding soils.

Helical Pile – An assembly of mechanically connected steel shafts with a series of helix-shaped plates attached in specific locations, whose capacity is determined by the force necessary to advance in specific soils.

Hydrostatic Pressure – Pressure that is exerted by a fluid due to its weight. Pooling of water at the surface or below grade are examples.

Lateral Pressure – The pressures exerted upon a wall by surrounding soils.

Load Bearing Stratum – A layer of stiff soil or rock that has the capacity to accept and dissipate the force imposed upon it by a deep foundation element.

Mudjacking – A process by which high-pressured grout is pumped under concrete to fill voids in an attempt to recover lost elevation. This grout slurry occupies the space between the foundation element and the failing soil.

Pier – A vertical load-bearing member such as an intermediate support for adjacent ends of two spans.

Plate Anchor – A device designed to permanently stabilize basement and retaining walls via a cleat or deadman anchor.

Pressed Concrete Pier – A concrete cylinder that is driven directly below the foundation by bottle jacks.

Radon – A naturally occurring gas which emanates from the ground and is present throughout North America. In concentrated form, it can cause cancer.

Resistance Pier or Steel Pier – An underpinning device that is hydraulically driven into the soil to a load-bearing stratum and provides its support.

Screw Anchor – An assembly of mechanically connected steel shafts with a series of helix-shaped plates attached in specific locations, whose capacity is determined by the force necessary to advance in specific soils. These anchors supply resistance to compressive and tension loads.

Sealed Drain – An interior drainage system that keeps water and humidity separate from the living space.

Sheetrock Cracks – These cracks develop due to the shrinking or expanding natures of construction materials or foundation failures. The cracks generally develop at corners, doors, and windows in a wedge-shaped manner, pointing toward suspect areas of failure.

Sinking or Settling Walls – The vertical movement of a foundation wall due to undersigned consolidation of soils supporting the structure.

Slab Cracks – Can be categorized as either a shrinkage crack, settlement crack, or heaving crack.

Slabjacking – A process by which high-pressured grout is pumped under concrete slabs to fill voids.

Stair Step Crack – A fracture in a brick or block wall that progresses upward along mortar joints. These cracks can be from either lateral pressures or differential settlement.

Steel Pier or Resistance Pier – An underpinning device that is hydraulically driven into the soil to a load-bearing stratum and provides its support.

Structural Damage – Visible distress in building components, such as drywall cracks, door frames out of square in their frames, concrete cracks, etc.

Structural Distress – A change caused by movement (foundation, framing, soil, thermal, etc.) that is reflected by the creation of cracking.

Sump Pump – A pump used to remove water that has accumulated in a sump pit. A sump pit, commonly found in the home basement, is simply a hole to collect water. The water may enter via the perimeter drains of a basement waterproofing system, funneling into the pit.

Synchronized Lift – A precision system that allows uniformed elevation recovery and permanent stabilization while minimizing stress to the structure.

Tie Backs – A helical anchor that transfers a lateral load from a failing wall to suitable load-bearing soils. Used on new and existing walls for vertical support and slope stabilization.

Total Settlement – A complete structural downward movement. If movement is minor or controlled this type of settlement is generally accounted for in a structures original design.

Underpinning – Process where a deep foundation element such as a helical pile or resistance pier is installed to depths below unstable or consolidating surface soils.

Vapor Barrier – a layer of material (such as roofing paper or polyethylene film) used to retard or prevent the absorption of moisture into a construction.

Void Filling – The low-pressure injection of a grout slurry to fill the space between the foundation element and the failing soil.

Waterproofing – To make impervious to water. In foundation repair terms it also encompasses techniques for rerouting water to a common collection point.

How Long Does Basement Waterproofing Last?

A flooded basement can be a homeowner’s worst nightmare. On top of having to pay for any repairs and future protection against flooding, you also have to deal with the logistics of finding basement waterproofing that is best for your location and situation. There are a variety of basement waterproofing options available, but you don’t […]