Dealing with a wet basement can be very frustrating. Water can damage walls and flooring and ruin irreplaceable things like photo albums and family heirlooms. If left uncontrolled foundation damage can occur. Knowing the causes of wet basements and how to prevent water damage can help prevent this frustration.

Where Wet Basements Come From 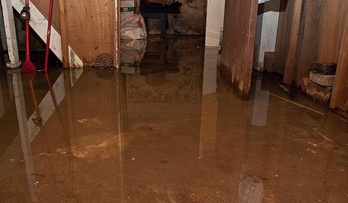 In order to prevent a wet basement, it is important to understand where the source of the water is coming from. There are four common sources of water that can seep into your basement:

When you experience a wet basement, it’s important that you determine if the water problems are going to reoccur or if it was a one-time event.

Controlling Surface Water
If this is the first time for basement water problems, check for surface water draining down next to the foundations. Water coming in at one location and only at the exterior foundation wall are typical indications of surface water problems. Here are some things to look for:

Controlling subsurface groundwater
If no surface water sources are found, then the source of the water is likely subsurface groundwater under hydrostatic pressure. Hydrostatic pressure can push water through hairline cracks. Symptoms of this are water coming up through cracks in the basement concrete floor or water coming in at multiple locations.

If you have an older house within town and the house has a basement with no sump pump, it is likely the perimeter foundation drain system connects directly into the city storm sewer system. If the level of the basement is below the street level, there is the potential of stormwater backing up in the city storm sewer system and being pushed into the perimeter foundation drain system. This can saturate the soils around the house at the basement level with stormwater under hydrostatic pressure, causing water to leak in.

No matter where it is coming from, the best way to control subsurface groundwater is to install some type of perimeter drain and waterproofing system to relieve hydrostatic pressure. The groundwater is pushed into the drain system and not into areas where it can damage carpets, walls or belongings. The water drains by gravity into a sump pit where a sump pump discharges it out of the house.

There are two basic types of drain systems for wet basements. One is a perimeter above-slab gutter system installed at the base of the exterior foundation walls on top of the floor slab. It doubles as a base material for the wall. The other type of drainage system is a below slab interior drainage system. The below slab system requires the partial removal of the concrete floor slab and installation of drainage pipe.

It is commonly known that an under-floor drainage system is better because the under-floor drains are believed to relieve the hydrostatic pressure before the water reaches the bottom of the floor slab.

Stormwater backing up into your home
In many older houses with basements (mostly pre-1980), there is a perimeter foundation drain outside the exterior wall, at the level of the basement floor, next to the footings at the time the house was built. A pipe was usually installed from the perimeter foundation drain to the street where it was connected to the city storm sewer system or to a sump pump system.

If it is connected to the city storm sewer it can become a problem as the city storm sewer system becomes too small when more development causes more rain runoff. When this happens, the rainwater in the sewer system can get so high that water flows backward toward the house. The perimeter foundation drain fills with water and releases large quantities into the soil next to the footing and basement floor. The soil becomes water-logged and the water which is under hydrostatic pressure leaks into the basement.

If that doesn’t take care of it, the other, more expensive alternative would be to dig up and cap the pipe that is running from the house to the street from the perimeter foundation drain. However, this is not always possible because many times, this pipe is also draining sanitary waste from toilets and sinks in the house. If you believe you have this problem, contact an experienced contractor for advice.

Sanitary sewer water backing up into your home
If the water is coming up through floor or sink drains in the basement, then the problem is likely water backing up from the municipal sanitary sewer system. This usually occurs in older sections of some cities that have combined sanitary and storm sewer systems. During heavy rains, combined sewer systems can become overwhelmed with water. This can cause sewer water to back up in the system and sometimes into homes.

You can imagine the mess this creates for homeowners because it usually means they are getting other people’s fecal waste backing up into their basement. To correct this, cities should update their sewer systems so the sanitary sewer and storm sewer are running in separate pipes. Until this work is complete, the homeowner can install backflow preventers that help stop sewer water from flowing backward into the house.

Unfortunately, because the city sanitary system works in conjunction with every house sanitary piping, the backflow preventer usually cannot be located on the house’s main sewer line. It usually requires several backflow preventers at all basement drain locations, such at every floor drain, sink and toilet. These backflow preventers require routine maintenance to make sure they are kept free of debris.

Let My Foundation Repairs get you in touch with an Earth Contacts Products contractor. They have the experience and tools to keep your basement dry.

There is a Gap Between the Soil and My Foundation

Many areas throughout the US have expansive soil, or soil with heavy clay content. Expansive soil swells when wet, and shrinks excessively when dry. When the soil shrinks, it often causes large cracks and crevices to appear. The expansion and contraction of the soil is often the cause for a gap forming between the soil […]