Any homeowner knows that a house is only as strong as its foundation. The foundation supports the weight of the entire structure, and any damage to the foundation can cause serious problems. That's why it's important to be familiar with the signs of foundation damage and know when to call a professional for foundation repair.

At its most basic level, a house is simply a collection of walls and floors built on top of a foundation. Without a sturdy foundation, the entire structure would eventually collapse under its own weight. And yet many homeowners neglect to pay attention to problems in their home's foundation, oftentimes not realizing how damaging they can be in the long run. Talking with an engineer or contractor can help you identify any serious issues and help you understand exactly how they are affecting your home. Whether it's cracks in the walls or uneven floors, foundation problems should always be taken seriously to prevent costly damage in the future. At the end of the day, your home depends on a good foundation for support and stability, so make sure that your foundation is doing its job! 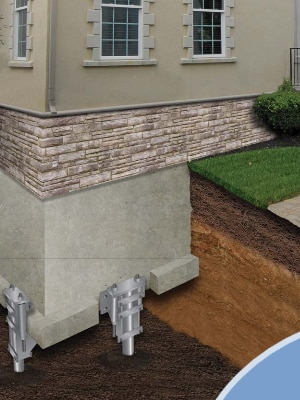 Your home is one of your most valuable assets. Furthermore, foundation settlement and sinking cause damaging effects to your home’s structure. Understand the causes and warning signs of foundation failure before the problem gets worse. In fact, look for the early warning signs of settlement. These signs include:

One of the most obvious signs that a home has foundation problems is a leaning or tilting chimney. In most cases, this is caused by unequal settling of the foundation, which puts pressure on the chimney. The result is an unsightly structure that is also potentially dangerous. Not only can a leaning chimney be aesthetically unpleasing, but it can also cause water to penetrate the interior of the home, leading to mold and mildew growth.

In extreme cases, a leaning chimney can even collapse, causing damage to both the home and any nearby buildings. If you notice your chimney beginning to lean, it is important to have it inspected by a qualified foundation repair specialist as soon as possible. Left unchecked, a leaning chimney can cause serious and expensive problems for your home.

One of the most common issues homeowners face is cracks in their basement foundations. While these cracks may not seem like a big deal, they can actually be a sign of major structural problems. Foundation cracks are usually caused by settlement, which occurs when the soil underneath the foundation settles or shifts. This can happen for a variety of reasons, including drought, excessive rain, or even poor construction. Foundation cracks can also be caused by hydrostatic pressure, which is created when water builds up around the foundation and puts pressure on the walls.

If left untreated, these cracks will continue to grow and could eventually lead to the collapse of the foundation. Fortunately, there are a number of ways to repair foundation cracks and stabilize the foundation. By addressing these problems early, you can avoid costly repairs down the road.

Gaps Around Windows or Doors

Gaps around doors or windows are often a sign of foundation problems. As the foundation settles, it can cause the framing to shift and create gaps. In some cases, these gaps can be filled with caulk or weatherstripping. However, if the problem is severe, it may require professional repair.

Left untreated, foundation problems can lead to serious structural damage. If you notice any gaps around doors or windows, it's important to have your home inspected by a qualified foundation specialist.

One of the most common foundation problems is water seepage. When water seeps into the foundation, it can cause cracking, swelling, and even collapse. In some cases, water seepage is caused by faulty construction or poor drainage. However, it can also be a sign of a more serious problem, such as a leaking pipe or faulty sump pump.

If you notice any signs of water seepage, it's important to have your foundation inspected by a professional as soon as possible. Repairing a water seepage problem before it gets worse can save you money and help to prevent further damage to your home.

One of the most obvious signs that a home has foundation problems is when walls start to bow or lean. This usually happens when there is too much weight on one side of the wall, causing it to slowly bend outwards. In some cases, this can be caused by the soil itself shifting and putting pressure on the wall. However, it can also be the result of an unstable foundation. When this happens, it's important to take action quickly to avoid further damage.

The first step is to have a professional assess the situation and determine the cause of the problem. Once the cause has been identified, they can recommend the best course of action to take. In some cases, foundation repairs may be necessary to stabilize the wall and prevent further damage. Left untreated, bowed or leaning walls can eventually lead to cracks, leaks, and even collapse.

One of the first signs that you may have a problem with your foundation is sticking doors. If you notice that your doors are beginning to stick or are difficult to open, it's important to take action right away. This is because a sticking door is often caused by settling, which can lead to serious damage to your home.

In some cases, settling may only cause cosmetic damage, such as cracks in your drywall. However, it can also cause structural damage, such as shifting windows and doors out of alignment. If you catch the problem early, you can usually repair it without too much trouble. However, if you ignore the problem, it will likely get worse over time, eventually requiring major repairs. As a result, it's always best to keep an eye out for early warning signs, like sticking doors, and take action right away.

If your foundation has settled and become uneven over time, you may have a shifting house. If this is the case, you may be in need of foundation leveling services. Old and new homes alike can experience foundation settlement depending on the soil conditions around your home.

A foundation that has begun to settle can be a real problem for a home. Not only is it an aesthetic issue, but it can also lead to structural problems over time. Dry and hot conditions can cause the underlying soil to shrink, while wet conditions can cause the soil to expand. Either way, the movement of the soil is what eventually causes a foundation to crack or settle.

Fortunately, there are a few methods professionals can use to correct a settling foundation. My Foundation Repairs can provide you with professional foundation repair and house leveling services to permanently stabilize your home. Don’t let your biggest investment lose its value because of structural damage. Our professional engineers will inspect your foundation and determine the best solution for your settling home.

One common solution for fixing a settling foundation is to use steel push piers. Steel push piers are made of steel and are installed into the soil beneath your home. They work by transferring the weight of your home onto the piers, which lifts the foundation and returns it to its original level.

These piers are used to repair and stabilize foundations. Helical piers are screw-like metal shafts that are inserted into the ground next to the foundation. As they are turned, they create resistance against the soil and eventually push the foundation up.

Another common method is to use plate anchors. Anchors generate support for cracked or bowed basement walls. Plate anchors are heavy metal plates that are drilled into the ground next to the foundation of your house. They work by transferring the weight of the house onto the ground, which helps to lift the house and stop it from settling. If your house is severely settling, you may need to use more than one plate anchor.

These piers are specifically used to lift concrete slabs.These piers are installed underneath the foundation and use hydraulic pressure to raise the slab. They are a good option for smaller houses, as they don't require as much lifting power as other methods.

Leveling your home will not only improve the quality of your home, but also increase its longevity. Although most foundation problems can be remedied, it is important to catch them early. Small cracks may not seem like a big deal, but they can quickly widen and cause major damage. If you notice any cracks or other signs of foundation problems, don't hesitate to contact a foundation repair specialist. Foundation repair is not a do-it-yourself project and trying to fix the problem yourself could make it worse. A professional will be able to assess the situation and recommend the best course of action. With their help, your foundation will be back to normal in no time.

We know that when it comes to fixing any type or size problem—from small cracks in foundation walls to major structural issues - hiring a professional who has experience working on homes like yours is key! Get an estimate today by contacting My Foundation Repairs.