Soil nailing is the technique of strengthening the soil to give it more stability. The process involves hammering steel bars into the soil, hence the name “soil nailing”. This process of soil nailing provides a resisting force against slope failures. The process is faster than other similar methods. 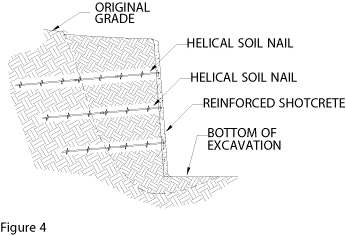 My Foundation Repairs installs ECP soil nails to stabilize the soil. These soil nails are installed in an evenly spaced close geometric pattern. When installing a soil nail stabilization project, the soil nail installation and the excavation must be accomplished in incremental depths of 4 to 6 feet until the final depth is accomplished. Immediately following the incremental excavation of the soil and the soil nail installations, the vertical face of the soil is covered with a steel reinforced coating.

If you are in need of soil nailing to stabilize soil to prevent foundation failure, contact My Foundation Repairs. Our contractors use only the best products for foundation repair manufactured by ECP. Contact us today!

For More Information Check Out Our Blogs

Cracked Foundation Repair: Why You Should Avoid DIY

Cracked Foundation Repair: Why You Should Avoid DIY Get to the Heart of the Issue With a Foundation Repair Expert With the variety of do-it-yourself products available for foundation cracks on the market today, it can be tempting to try to fix cracks on your own. It is natural to want to find a “quick…

Common Problem: Leaning Beams and Posts A Closer Look at the Causes and Solutions If you have discovered leaning beams or posts in your crawlspace or basement, we understand that can be frightening. It is difficult to know how serious the issue is, and what needs to be done to fix it. At My Foundation…

Common Foundation Problems: Don’t Forget Your Roots How Tree Roots Contribute to Potential Foundation Problems We all root for trees, trees are one of the most valuable contributors to the health of our planet.  Not to mention that a beautiful, sprawling, tree in your front or backyard adds character and warmth to your home.  You…