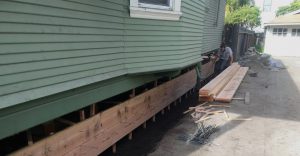 Of the many projects New England Foundation and Stabilization Co. have reviewed and worked on, this small house is on the top of our list for the most severe settlement we have witnessed. Our company had reviewed this project several times under different owners until finally the settlement required repair of the structure or the city would declare it condemned. The entire perimeter of the structure had settled over years, but drastically along the front of the house. In some cases, the structure had settled over 12 inches in less than a span of 12 feet. At one time, this neighborhood was a large dump site and the depth of fill in some areas exceeded 80 feet.

Large cracks were somewhat visible from the exterior and interior of the house. However, a thin layer of fiberglass coating was parged onto the foundation to hide the deteriorating condition of the foundation to new buyers. The foundation had also rotated out from underneath the house up to 5 inches.

The interior of the structure also showed every significant sign of settlement in some of the most extreme conditions. This included sloping floors, sticking doors, floating walls, misaligned windows, and cracked drywall. 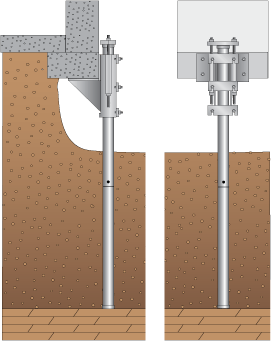 The ECP Resistance and Helical Piles proved to be the perfect solution for this house. The steel piers are hydraulically pressed piles that fasten to the foundation and advance through the poor bearing soils that allowed the structure to settle. The helical piers are small “screw” piles that are torqued through the poor soils into good bearing strata. A total of 20 ECP Model 350 Piers were installed on the inside of the foundation wall. A total of 4 helical piles were installed for the new column supports at the beam. The average depth of the ECP push piers was 65 feet.

The owner of the property purchased it in hopes of restoring and flipping the house. His crews removed some areas of the horsehair plaster where cracks had occurred due to the large lift. They then re-plastered and refinished the interior finishes.

After several weeks completing the full renovation, this house was placed on the market. The new owners will be pleased to know that their foundation will no longer sink and that it is guaranteed for 25 years by our manufacturer ECP Steel Pier System and New England Foundation and Stabilization Co.